skip to main | skip to sidebar

The Lovely World of Fertility Treatments

Shaun and I always knew that we wanted kids right way, but of course things never seem to go the way you plan.  As most of you know, through the years we've done fertility treatments off and on, special diets, and all kinds of vitamins, and then of course we finally were blessed by adoption.  So, at the beginning of  the year we started thinking a lot about how another child would come into our family.  We prayed and talked, and prayed some more.  For some reason we thought we would do treatments and the adoption process, but we kept getting the feeling that we were only supposed to do fertility treatments.  This was really hard for me, it was hard to give the little control that I thought we had and trust in the Lord, and follow one path. So, in March we started working with our Doctor to start up treatments again.  After talking with me and looking at my medical history he thought that I might have endometriosis, and the only way to find out is surgery  In April I had the laparoscopic procedure done, and they did find that I do have endometriosis.  This was a relief to me after going through so many years of unexplained infertility.  In June we did our first IUI with no success, and then in July we did another IUI and soon found that we were expecting!!  I can't tell you how excited we were, I truly couldn't believe that the treatment had really worked!  A couple days later my doctor had me go in for a blood test to check my hcg levels.  They were a little low so I kept going in. We found that they were going up, which was a great sign.  Even though my numbers were going up they still needed to get a lot higher.  I think over all I went in for 8 blood tests ( I hate needles), but my numbers soon started dropping.  I knew that this wasn't a good sign and soon miscarried.  Even though this was hard for us we are truly grateful for this experience.  We now know that it is possible for us to get pregnant.  We are hopeful that things will eventually work out.  I do know that Heavenly Father would not lead us in the wrong direction.  I'm choosing to trust in Him, even though I don't know what the out come will be.  We are excited for what comes next, and for now we are happy and enjoying the blessings that we do have.  I don't want to focus on the negative because we truly have so many wonderful things to be grateful for.  I would hate to waste my time being sad and missing out on everything that is good in our life!
Posted by Jamie at 3:37 PM 10 comments:

What's Been Going On

Well, It's been an extremely long time, due to us being without the Internet.  Now that we are once again a part of the 21st century, I can now blog, scan Facebook, and search Pinterest to my hearts delight.  Life has been pretty normal since I last wrote.  Shaun Started a new job as CFO at Metalcraft, which is a company that builds jet airplanes.  So far he loves it!  It definitely keeps him busy, but I can tell he's happy!  He also has been serving as a leader in the Young Mens, which also keeps him really busy, but he loves it, and loves getting to know the kids.  He also has been playing a lot of basketball, either with City League, or church ball.  He's even gotten Carson obsessed, and now he carries his basketball all over.  I am still at home taking care of Carson, and I wouldn't want to do anything else.  I feel that I finally found something I love to do everyday!  I have been serving as the Secretary in the Primary.  I love being with all the kids, they make me laugh with all the things they do and say.  I hope that this calling will help me be a better mom, and help me teach my kids the gospel.  I've also started to make jewelry that will be sold in a Salon in town, I'm pretty excited!  Carson is getting really big!  He is now 18 months.  On the 12th it will have been a year since he was sealed to us.  It's crazy how fast time goes by!  He is an extremely busy kid, with tons of energy!  He loves to climb on everything, and to my dismay he now moves the kitchen chair over to the kitchen counter so he can climb up.  He loves Sesame Street, and is starting to laugh at things they do.  Right now he really thinks it's funny when they do Karate (he now karate chops everyone), when they rap to music, and when they fall down.  He is also talking a lot.  He says "please, thank you, go, bye, hi, nummy(yummy), Nana, Papa, Grandma", and a bunch of other words.  I'm still amazed at how fast he is learning these things.  Well, that is a really quick update on how we have been doing! :)
Posted by Jamie at 12:48 PM 3 comments:

We've had really great summer!  We closed on our house in May, it only took seven months!  At least it finally worked out, we have really been enjoying it, and we really love our neighborhood and ward!

Shaun's little brother Steven got married in June, so now I have another amazing sister-in-law!  The wedding was a lot of fun.  They got married in the Manti temple, which I thought was amazing!  Shaun's youngest brother Bryson left on his mission in June to the Dallas Texas mission.  It's weird to have him gone, but we're so proud of him, I know he is going to make a great missionary.


On the 4th of July Carson went to his first parade, I thought he would have been scared of all the noise but he seemed to really like all the commotion. 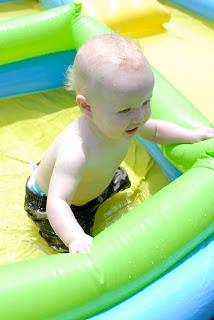 At eleven months Carson finally decided that he was ready to walk, it was kind of a nice change since he wanted you to walk him everywhere, so my day usually consisted of walking around in circles.  Now I'm just chasing him around trying to pick up the contents of all the drawers in the house, and trying to track down my shoes, for some reason he has this thing with shoes!

On August 7th Carson had his first Birthday!  Can you believe that it's already been a year?!  I can't believe how fast time has gone by.  For his party my sister made him a fish cake!  We of course had to do something with fish because of his dad!  We'll see if he likes fishing as much as Shaun.  I also made some cupcakes with fish on top.  It was really fun to have both our families there, but I guess I forget how many people there are.  I think it was a little over whelming for Carson, and it didn't help that he was getting four teeth.  Despite a little crying I think he had a good time, and got way more presents than any one year old needs.


Everyday I feel so blessed that we have him in our lives!!  He truly makes us so happy, and I still can't believe that we've been blessed so much!  I know that Heavenly Father truly answered our prayers.  Adoption is the most wonderful thing, and I realize that not everyone will fully understand how amazing it is, but I am so grateful for the experiences we have been given, and for the sacrifice that was made by our birth mother!

Music- He's either dancing to it, playing with the piano, or carrying Shaun's ipod around!

Dogs-  He is fascinated with them, his first word was "ruff".

Getting Chased-  He loves when people chase him around the house it makes him laugh like crazy, he mostly loves when dad does it.

Bath time- He is definitely a water baby.  He'd probably stay in the tub all day if I would let him! 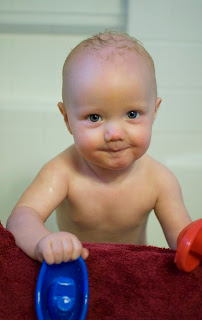 Cars- He loves driving his toy cars everywhere and now riding the firetruck Nana and Papa gave him. 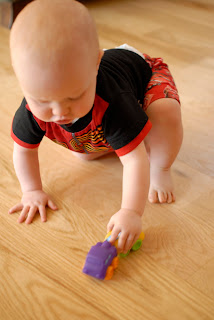 Waving- He loves to wave hi and bye to everyone.  I was in Walmart the other day and he kept waving at everyone, I guess he's really friendly.

He truly is the sweetest baby, who always makes us smile.  We love you Carson! 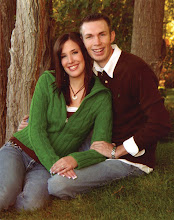 Shaun and I have been married 6 wonderful years. I have been so lucky to have married such a wonderful guy! We were blessed with our beautiful baby through adoption. He has added so much joy to our little family! I've learned that life doesn't always workout the way you plan, but some how it ends up being better then you could have ever imagined. I am always amazed at how the Lord keeps blessing us everyday. We truly have a wonderful life!